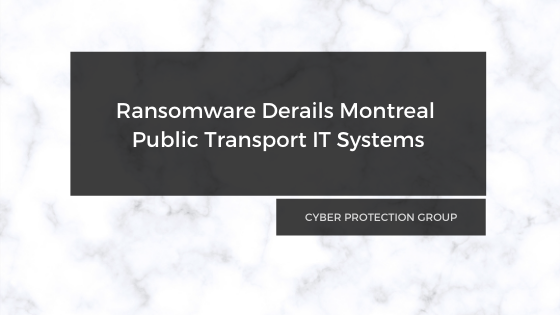 Last Friday, the Cyber Attack of the Week series ventured across the pond to London. Today, we’re taking a trip up north to Canada. The city of Montreal to be exact!

Although we wish the “trip” were under better circumstances, but, this is a series about cyber attacks. And this week, the Montreal Public Transport System is under attack.

The Attack in Montreal

To begin, on October 19th, Société de transport de Montréal suffered an attack that crippled their IT systems, sites and customer support.

While the functions of the actual transport systems continued to operate during the attack, services to aid those with disabilities on public transport reported the issues with the systems.

During the attack, Société de transport de Montréal  or STM, released a statement to update the public on the situation.

Continuing, STM brought in law enforcement and cyber crime investigators to get to the bottom of the situation and mitigate the vulnerabilities.

Currently, while the system is under investigation, some online services for STM are currently unavailable.

Their website for one is still not up and running. When searching for their page, you will be redirected to an informational page on the attack and other information.

Many researchers claim that the direction of cyber attacks may take a turn to country infrastructure. This would include targets like public transportation, roads management, power supply, etc.

Now is the time to put policy and procedure in place to protect such systems, and the citizens who depend on them.

"Qualys has demonstrated that three of the flaws pose an unauthenticated RCE risk – a severe class of vulnerability that requires no action from the victim and can result in full system takeover. #infosec #CyberSecurity

"The site used trademarked logos for Pfizer, the World Health Organization (WHO) and the United Nations High Commissioner for Refugees (UNHCR) on its home page to dupe visitors into thinking it was a legitimate site" #infosec #CyberSecurity

‘Freevaccinecovax.org’ claimed to be that of a biotech company but instead was stealing info from visitors to use for nefarious purposes.