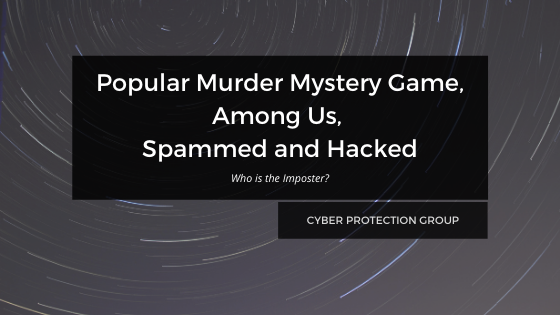 There is quite literally an Imposter Among Us…

Welcome back readers! This Monday marks the beginning of Halloween week. For many fans of the spooky holiday, we are preparing for costumes, candy and parties.

But, in the theme of all things spooky and mysterious, CPG is taking a look at a popular murder mystery type of game that is recently under attack.

The game we will be discussing is Among Us by Inner Sloth.

Who or What is Among Us?

To begin, the CPG office and the Among Us game go way back. My coworkers and I actually play and enjoy the game often.

Continuing, the theme of the game is as follows. On one of the various settings for the game (my favorite map is the OG, the Skeld) you along with up to ten other crewmates must discover the imposter.

While in your pursuit of the fake crewmate, you must also complete various tasks as another means to win the game.

Players vote on who they believe is the imposter. This allows time for discussion with others in a voting chat.

Sometimes several rounds are played before the imposter is discovered. Other times, someone might discover the imposter as they try to hide in a vent or kill another player.

Overall, it is a very fun game, and a great team building exercise (if your are in an office like we are).

The Attack on Among Us

Continuing, although the game may appear as some mysterious fun, recent reports indicate that hackers are now taking an interest in the game.

To elaborate, players are taking to social media to report recent issues with the game. At the beginning of the game, prelaunch, players are experiencing a variety of issues.

This is what researchers are dubbing the ‘Eris Loris’ attack. The issues include all black pregame screens and game play, as well as a barrage of spam messages in the chat stating “Trump 2020” and to subscribe to certain YouTube channels like Eris Loris.

Many players of the game involve a variety of ages, but especially kids and teens. This hack presents a wide range of concern and annoyance among the players.

Further, the developers of the game, Inner Sloth, tweeted regarding the issue. The creators recognize the problems, and promise to be rolling out a server update to prevent this type of issue from continuing.

The developers also go on to say that until the update is out, to only play in private games with other players you know or trust.

Continuing, this is a way to prevent this type of hack or spam from ruining your current game or receiving spam messages in the chat.

From my personal experience , the Inner Sloth developers are quite good and keep their word regarding updates and patches for gameplay. Hopefully, the update is released soon, and normal gaming may resume.