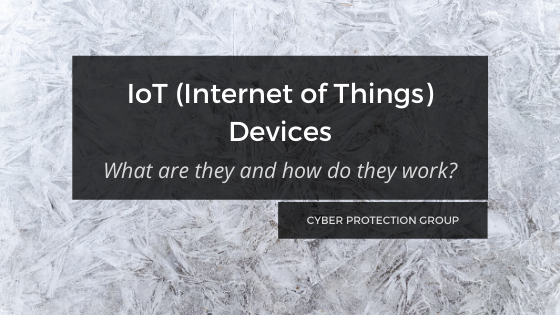 “Make sure your IoT device is secure!” “Regulate IoT devices now! “What the heck is an IoT device?!”

IoT or internet of things devices are taking over the technological world. The integration of connectivity among devices proves to be both beneficial and detrimental. But, we’ll get to that in a little bit.

First, you are probably still wondering what an IoT device actually is. Well, as it turns out, you may be more familiar with these types of products than you think.

To begin, by definition an Internet of Things device is, “a system of interrelated computing devices, mechanical and digital machines, objects, animals or people that are provided with unique identifiers (UIDs) and the ability to transfer data over a network without requiring human-to-human or human-to-computer interaction” (via Wikipedia).

Further, what this definition means is that certain devices contain the ability to be able to communicate without human interaction (regarding the transfer of data or information) via an internet connection.

Continuing, the devices are also equipped with sensors, integrated software, and network connection capability that allow them to perform tasks.

In many cases, IoT devices can aid the user in everyday tasks. This includes managing the thermostat, to turning on the lights in your home. Let’s take a look at some popular devices.

Internet of Things Devices in Action

To dive in, some of the most common and popular IoT devices come from Google and Amazon. Does the Google Home or Alexa ring a bell? Both companies created IoT devices that span out to a number of different products.

Amazon created similar products as well, as they launched the Alexa and Echo systems in November of 2014. Their list of products includes the Echo Dot, Echo Show and many others.

Getting to the point, both the Google and Amazon devices have the ability to perform the tasks listed below:

The ability of these devices to simply need an internet connection to provide such services is amazing, but also a little scary.

As much good as IoT devices can provide, a gray area regarding security and regulation lies.

The occurrence of security and privacy issues occurred as the popularity of such devices rose. Many examples which regard an attacker gaining access to the IoT device via a network connection. From there, they access built in cameras or microphones on the devices.

Further, attackers tend to go a number of ways with how they attack victims through such devices.

One, they use weak or outdated security software to find their way into the device and or network. Access is also found via exploiting bugs or unpatched issues within the device or home network it is resides on.

From there, they may use the access to propagate through a network, access other devices and steal or encrypt information

Another means of attack is taking over all connected devices rending the user’s access useless. The attacker may assert themselves by messing with connected lights or thermostats – almost like a prank.

Or, they may take it to the next level through this example. Say the victim resides in a smart home with an IoT security system they can manage through and Echo device or smartphone.

An attacker could possibly gain access to the devices, open locks and enter the house. From there, one can only use their imagination to think of what would happen next.

Regulation and Security of IoT Devices

Continuing on, the example of the dark side of IoT is why many people now see the importance of implementing security to protect their devices. IoT isn’t going anywhere any time soon. This type of technology is integrating into so many platforms and devices currently.

So what do I do now? Many people ask this very question once the other side of IoT is revealed.

Securing your home network is a great place to start. Internet is in the name of these devices, it is what they are based and run off of. A strong password and proper security software on home internet and networks is one step in securing an IoT device.

Next, making sure that the software on the IoT device is patched and up to date is crucial. Attackers prey on vulnerabilities that they can exploit. This is one of the main ways unauthorized users gain access to such devices.

Lawmakers and other in the political realm are calling for regulation on anything with IoT capabilities to ensure the safety of the user. This is due to the fact that currently, if a company produces an item with IoT capability, they do not have to ensure user safety or security whatsoever.

This is why many are currently pushing for this to change in the future. The regulation generally who call for IoT device manufacturers to include proper security measures put in place for any IoT devices purchased.

All in all, IoT devices can provide a lot of helpful and fun features, but also jeopardize security for users.

Where do you stand? Do you have any IoT devices on your home? Tweet us at @cyberprotectgrp and let us know!