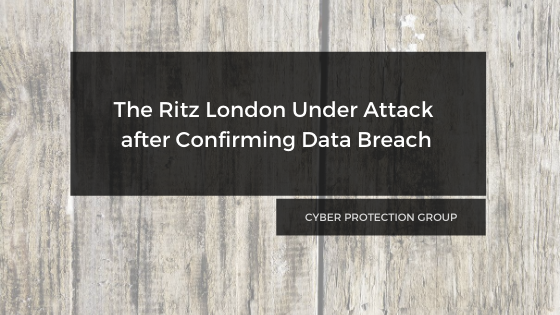 Good morning, afternoon or evening! We’re back again this Friday with another cyber attack of the week, here at CPG. Today, we are reviewing the recent attack on the Ritz London.

This prominent hotel is located in the UK and provides 5-star experiences and Michelin-Starred restaurants. What could be more regal? Well, as great as staying at the hotel, a recent cyber attack may put a damper on things for guests.

To begin, in a recent string of tweets, the hotel confirms that they experienced a data breach on August 12th, 2020. They believed the potential” breach may have put guest information at risk, and launched an investigation.

We can confirm that on 12th August 2020, we were aware of a potential data breach within our food and beverage reservation system, which may have compromised some of our clients’ personal data. This does not include any credit card details or payment information.

Further, where did the attack start? To elaborate, the evidence shows that attackers gained access through a vulnerability in the restaurant’s food and beverage registration system. The hotel failed to recognize the issue that led to an even bigger problem.

Continuing on, in a tweet, the Ritz stated that they did not believe that any credit card or other payment information fell victim to the attack. But, the attackers were smart, and wasted no time in scheming up a larger plan.

Now, even though the hotel claimed that the payment information did not become exposed, other leaked data is what became a part of the bigger plan.

One of the attack methods turned out to be the attackers spoofing the hotel number and employee status to contact guests directly. Further, they used tactics like confirming trip details, verifying payment information and more.

Then, they scammers used any and all information learned in the attack to make purchases on the guests’ account. Some were lucky enough to notice the fraudulent charges and handle the issue.

We immediately launched an investigation to identify the cause of the breach, which is ongoing, to find out what happened, how and to prevent this from happening again. We have contacted all of our clients whose data may have been compromised and alerted the ICO of the incident.

While this issue is still under investigation by the hotel, it is unclear how many guests are still at risk. In another tweet, the Ritz stated they are contacting clients and working with investigators to ensure this never happens again.