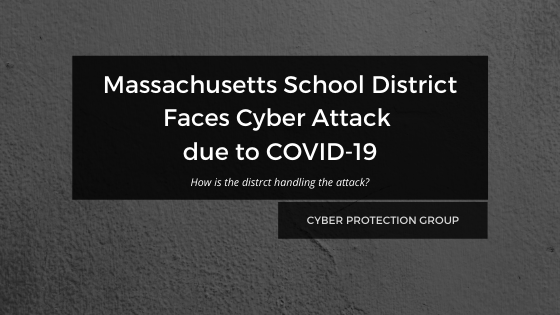 What a busy week for cyber security news! (and it is only Monday). In previous articles, CPG mentions the countless ransomware attacks on the medical industry.

We see that due to COVID-19, cyber attacks, especially ransomware, are at an all time high.

Further, as we previously discussed the attacks on hospitals, attackers also have their eyes on another target, public schools. And for this article, a public school district specifically in Massachusetts.

School is Out in Massachusetts

To begin, those who use ransomware, or any type of cyber attack in general are always looking for those in trouble, so to speak. For example, due to COVID-19, schools all over the world are doing their best to provide a proper education for their students.

Whether that is teaching in the classroom or virtually, schools are doing their best to educate young minds.

With the confusion, technical difficulty and stress brought on by COVID, attackers see a window of opportunity to attack. Further, that is exactly what they did to a public school in Massachusetts.

Recently, a school district in Massachusetts, the Springfield Public Schools to be exact, faced a cyber attack that forced the district to shut down remote classes.

Continuing, the Springfield Public School district is one of the largest in the state, and almost 60 of their schools shutdown remote learning as a result of the attack.

Updates via Twitter and Facebook kept parents and guardians in the loop until the school made an official statement regarding the attack.

Due to issues with our network, school and remote learning activities are canceled for the remainder of today (Thursday, October 8th). pic.twitter.com/rIMCKbuoQz

While ransomware is the current suspect for the attack, the school did not confirm whether or not that was the culprit.

The Recovery for the Massachusetts School District

Following the shutdown of classes on October 8th, the school released an official statement regarding the attack.

Mayor Domenic J. Sarno and Superintendent Daniel Warwick announced today that out of an abundance of caution the Springfield Public School’s (SPS) have issued an early dismissal from school today. And, have temporarily suspended remote learning due to potential threats to the network that have been identified.

Following the statement, the district claims that the remote learning is accessible, and that the systems are up and running.