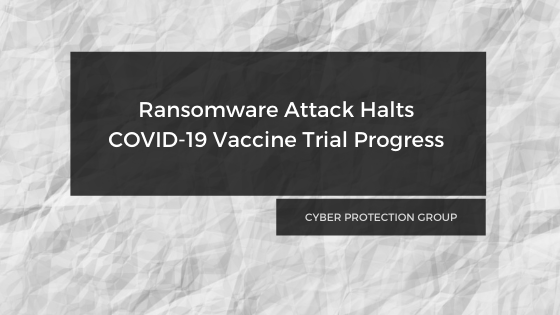 If you have a TV or internet access, you know that the chronicles of a COVID-19 vaccine pop in and out of new headlines, constantly.

In that lies the debate of whether or not the general public will receive the vaccine, or even if it will ever be released at all.

Nonetheless, the topic of today’s article is about the vaccine, but also a ransomware attack.

Recently, a ransomware attack against the research lab developing a COVID-19 vaccine experienced production issues due to the attack.

This Friday, CPG is here with the latest on the cyber attack, and ready to discuss. Let’s begin.

To begin, we must first identify the victim of the recent cyber attack. eResearch Technology, “a global company specializing in clinical services and customizable medical devices” is who we are talking about today.

Further, this facility is one of several labs currently studying and working on a COVID-19 vaccine.

The ransomware attack occurred on September 20th, although the company did not release a statement about the attack until recently in an article for the New York Times.

The severity of the ransomware attack caused the research on the vaccine to slow down, almost to a halt.

In the meantime, the company revealed that security experts as well as the FBI were called in to investigate the situation.

After the attack, ERT mentioned that in the next few days, systems and research will be up and running once again.

Leadership from ERT has yet to mention if they paid the ransom to regain access to systems, or they have the resources to restore their own systems.

Overall, during times like these, cyber criminals are more likely to attack. This is mainly due to the fact that desperate times call for desperate measures.

Attackers know that attacking a vital company, like a medical facility, will cause the victim to act more frantically. This sometimes leads the company to pay the ransom to regain access to their systems.

This only stresses the issue of implementing cyber security protocol and procedure. Back up systems, intrusion detection systems and other cyber security tactics provide a great line of defense against a virtual threat.