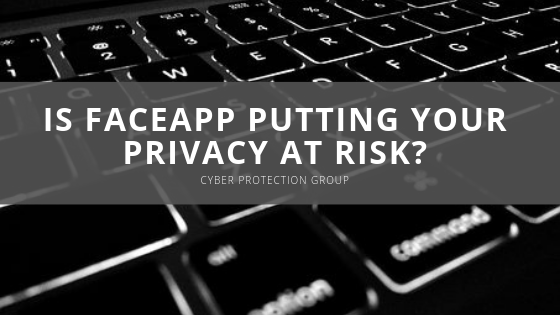 Have you ever wondered what you would look like in 50 years? The FaceApp can give you a glimpse into your wrinkle-filled future in exchange for one thing… your privacy.

FaceApp – AI Face Editor is the application that everyone on social media is using, liking and sharing at the moment. FaceApp is available in the Apple App Store as well as the Google Play Store and is free to download. Within the app, it provides a wide range of different face transforming filters. Each filter utilizes artificial intelligence or AI to make the transformation even more realistic. As shown above, you can see how the original image (first image on the left, top row) is altered with the different filters you can choose from below each picture.

The most popular filter is the old age feature (shown in the second image from the left, top row). This filter adds wrinkles, age spots and even streaks of gray hair to your photo.

From your friends on Facebook to celebrities on Instagram, many users are altering their image in the app which then makes its way to your news feed.

This action has prompted millions of people to download the app and begin to edit and age their selfies. Although the app is fun to alter pictures with and share online, major privacy concerns are beginning to surface.

To begin, the main concern with the FaceApp is privacy and security. To explain, these concerns come from one of two main areas: where creation of the app took place, and what the privacy policy / terms of use actually allow.

When the user opens the app for the first time, the app asks for permissions. The permissions include photo library access and camera access. This function is essential to make use of the application. The permissions when the app opens is the main issue that users and researchers find troubling.

To clarify why this is causing panic, the worry stems from the fact that the app is a Russian start up. This means that development and maintenance of the app takes place in Russia.

When a user uploads a picture to the app to edit, they give permission to the app to allow access to their photo library. This is fairly standard among photo editing apps.

But, the catch here is that under the Terms of Use, it says the user gives, “ irrevocable, nonexclusive, royalty-free, worldwide, fully-paid, transferrable sub-licensable license” to FaceApp.

This means that FaceApp virtually can do whatever the wish with your uploaded image.

Next, questions about the access granted continue. Accusations of FaceApp uploading and storing the user’s entire photo library on their server arise.

Essentially, to round the concerns out, it is believed the user is handing over access to their uploaded image as well as their entire camera roll to the app developers.

This assumption is concerning because the app is a Russian start up. Users believe the Russian government and other entities can access the photo database. With the access granted by FaceApp is is said that Russia will use the server data maliciously, or FaceApp will sell the data to other companies.

After various theories and stories spread across the news, several US senators and other government figures recommend deleting the app immediately for security and privacy safety.

FaceApp did release a statement about the issues regarding the accusations of uploading entire photo libraries to their cloud server and sharing the data:

“Most images are deleted from our servers within 48 hours from the upload date,”

“We don’t sell or share any user data with any third parties,”

(to read the full press statement via TechCrunch, click here)

All in all, rightful cause for concern with the app is justifiable, even if the consensus of concerns is not %100 accurate.

To explain, just because the creation and development of the app took place in Russia, does not necessarily mean the government has access to its data bases.  What many forget is that everyday, we upload and post pictures of our families, and check in at different locations across various social media platforms. This information is readily available for anyone worldwide.

This may not be the same as the possibility of entire photo libraries being uploaded, but our image and information is still out there.

Where do we go from here?

The take-away here is users should start taking a closer look at terms of use when downloading similar apps. In this day in age, it is important to be conscientious of cyber security risks. Especially due to the rise in cases of cyber attacks and stolen identities.

However, it probably wouldn’t hurt to delete your FaceApp… just in case.

Check out our article on the secret feature of AirPods!