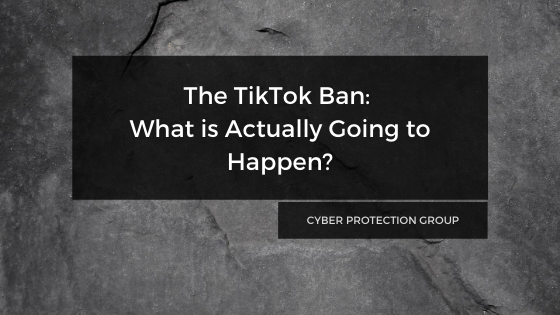 TikTok is officially banned, now it’s now. Yes, for SURE TikTok is banned, oh wait – not quite. What is actually going to happen?!

Hello to the cyber enthusiasts, generally curious and/or positively confused! Today, we’re taking a look at the journey of the TikTok ban. Will the ban go through in US? Isn’t it already? I thought it is only to be accessed by certain people?

CPG is here to help with all the questions and confusion, let’s take a look.

To begin, TikTok is a video sharing platform for users to post a variety of 15 to 60 second long videos. Users post dance, lip syncing and vlog style videos. Further, this platform is one of the most popular apps in use right now.

Further, people of all ages choose to use the app to share posts and watch videos everyday.

But, the application is owned by ByteDance. This company is a Beijing-based Internet technology company. This is where the general concern of the app use in the US stems from.

What is the issue?

Continuing on, the main reason that TikTok is even up for debate on whether to ban it or not is because of the Chinese based ownership and censorship. Other countries besides the US like India are considering the ban of the application.

India actually took measures to ban the app from use within the country. And now, the US is looking to do the same. While India focused more on the censorship aspect of the app, the US shows concern about security and privacy.

Overall, the ban is focused more so on the parent company, ByteDance, which owns TikTok. President Trump and other political figures present concern and worry towards the app essentially being spyware for the Chinese government.

Research indicates that TikTok collects information on their users beyond what anyone expected. This included monitoring what users were copying to their clipboard on their device.

All in all, it is looking like TikTok will be banned in the US by September 15th, if the company is not sold or a deal is reached with ByteDance.

The Future of TikTok

Throughout the pandemic, not only kids but people of all ages turned to TikTok as an outlet of distraction during these crazy times. Many face outrage over the fact that the application may not be accessible.

But, negotiations between the US government, Microsoft and ByteDance are making headlines. President Trump stated that the ban would be reconsidered of the application is purchased by a US entity.

Microsoft released a statement regarding this topic. The company is willing to purchase TikTok from ByteDance. As great as this sounds for us here in America, the idea is causing and uproar in China.

Chinese citizens are upset at the fact that the Bejin-based company is bending over backwards to work with those in the US. They call for negotiations to cease and that TikTok remains under the ByteDance Umbrella.

Will Microsoft purchase TikTok and make it an American platform? Will the ban go through in September? Only time will tell.