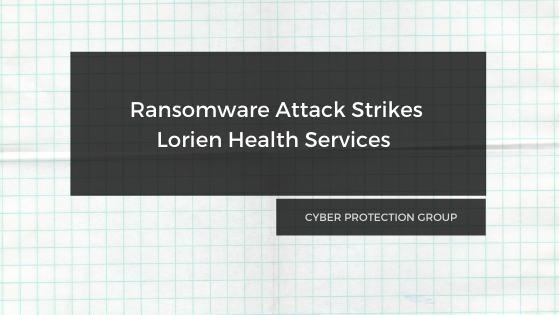 Cyber Attack of the Week 21

Once again, it appears that COVID-19 era hackers found another target in the healthcare field. This week, reports state that a Maryland based nursing home became a recent victim of a ransomware attack.

The recent attack indicates that tens of thousands of patients in the facility may now be victims of the data breach.

In the article, CPG is taking a look at the attack and the response from the nursing home. Now, let’s dive into this week’s cyber attack.

Lorien Health Services is a family owned, elderly care company based in Maryland. The company has over 40 years in the assisted living and care field, offering a wide range of care services.

Sadly, the Lorien Health services reported that they became the recent victim of a cyber attack.

Researcher articles from other security sites like Bitdefender attribute the attack to “Netwalker ransomware gang, which apparently leaked some of the exfiltrated information after Lorien Health Services refused to pay the ransom.”

Further, on July 17th of this year, the company released a statement in regard to the breach that occurred on June 6th, 2020.

On June 6, 2020, Lorien Health Services (“Lorien”) experienced a data security incident that encrypted some of its information

After the initial recognition statement of the breach, the release goes on to mention that the company immediately took action. Cyber professionals are now working with the company to remediate the issue.

Upon detecting the incident, Lorien immediately engaged a team of cybersecurity experts to assist with its response and to determine whether any personal information may have been accessed during the incident.

Next, the letter states that the personal information of residents fell victim to the breach.

On June 10, 2020 the investigation confirmed the access of personal information during the incident. The information may have included residents’ names, Social Security numbers, dates of birth, addresses, and health diagnosis and treatment information.

Further, the company continues to mention that the issue is now in the hands of the FBI for further investigation. After the mention of the investigation, Lorein states that all possibly affected residents will receive a notification.

As a consolation for the breach, Lorien will offer free credit monitoring and ID protection. To read the full statement from Lorien Health Services, click here.

All in all, the personal information of 47,754 residents received exposure in the breach. This included everything from social security numbers, to health issues.

Even with the credit and ID monitoring services provided to residents, the process of remediating the breach will take some time.

Above all, most importantly, certainly

Meanwhile, during, subsequently, after that