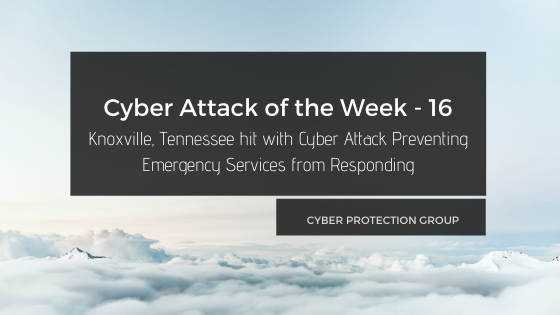 Knoxville, Tennessee – the gateway to the Great Smoky Mountains and delicious southern eateries. This city in Tennessee contains a population of almost 200,000 residents.

Contrary to popular belief, this city is not on the same population level as Nashville (almost 700,000 residents), but still brings in it’s own tourist crowd.

Further, not only does the scenery and bustling downtown scene attract visitors, it also attracts cyber criminals to the technical infrastructure.

This Friday, CPG is taking a look at the cyber attack launched on the city of Knoxville, Tennessee. We will dive into the attack, and the effects in turn that are detrimentally affecting the city’s emergency services.

To begin, the attack on Knoxville occurred last week on June 10th (2020). The ransomware attack knocked the city network offline, causing a ripple of issues for emergency responders.

Due to the attack, the police force in Knoxville did not have the ability to respond to traffic crashes and other emergencies around the city.

Now, the issues did not stop at police officer responses. The attack also created issues for the entirety of the city’s internal network, as well as the city websites and other internally based network services.

The city has yet to reveal exactly how the attack made its way into the network. But, researchers and other sources believe the attack came from some form of a spear phishing email, opened by a government employee.

After the initial attack, the Knox County mayor responded via twitter about the matter.

“Cyber attacks can happen to anyone or any government no matter how good the defense is. In a lot of cases it’s not a matter of if but a matter of when. Our IT department has been in contact with the city and we stand ready to help if they need it.” – @GlennJacobsTN pic.twitter.com/34g5ljtGql

As one can see, the city claims to not see any evidence indicating that the county was hacked. But, now puts forth a network separation between county and city to better protect the infrastructure.

Continuing, other sources claim that a ransom payment was a factor in the attack. The city is keeping rather quiet on this issue. The city said that the issue is now contained, and cyber security updates and efforts will be put in place to better protect the city network infrastructure.