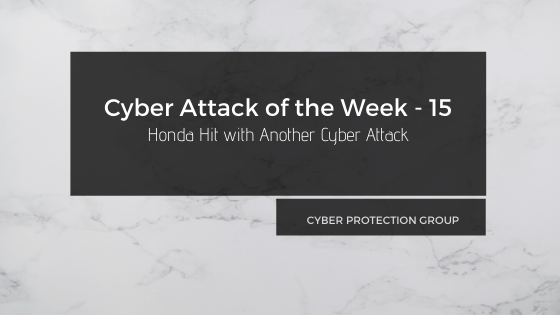 It looks like this week, Honda isn’t hitting the road, but maybe the cyber security department…

Hello everyone, and welcome back for our 15th article in the cyber attack of the week series! This week, we are switching lanes (no pun intended) from the beauty industry, the automobile industry.

This week, Honda announced that they halted production at several plants across the world due to a cyber attack.

Now, the pause on production is not something that is entirely a choice made by Honda. Actually in this scenario, the company had no other choice then to halt production due to the cyber attack bringing down internal networks.

This action produced by cyber criminals put plants located in the US, Turkey, South America and India on hold.

Now, let’s take a look at the attack. To begin, due to the rather covert nature of the attack, many details are not public yet. But, researchers are now coming forth with evidence that Honda was hit with Snake malware.

This malware attacked not only Honda this week, but also other large companies as well. Like many ransomware situations, the Snake malware has the ability to encrypt files and hold them captive.

But, a spokesperson for the company claims that they have yet to find any indication of sensitive data being breached, and believe the issue will resolve quickly. Other sources believe that the criminals behind the Snake malware attack may be bluffing in regards to actually breaching sensitive data.

All in all, Honda faced a relatively not so devastating attack. In comparison to many other data breaches, past and present, the company is doing fairly well in this situation. But, not to discount their current citation; it is always alarming when systems are under attack.

But all in all, the situation definitely had the components to be more devastating than it was.

Honda claims to have the internals systems that faced the attack back up and running as soon as possible. This goes for production as well.

Now, do we say their quick recovery is due to proper cyber security protocol and procedure? Or rather is it that the attackers just didn’t cause that much damage?