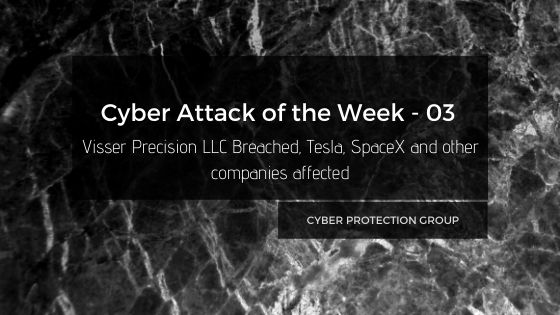 Another Friday, another data breach to discuss. This week, attackers shoot for the stars (somewhat literally).

We’re back again this Friday with a new Cyber Attack of the Week! This Friday, we have a bit of an avalanche effect on our hands. To begin, we have several companies that were caught in the middle of another organization’s cyber attack.

Continuing, the US based manufacturer, Visser Precision LLC fell victim to an attack that specifically targets manufacturing companies. The company became caught up in a ransomware attack. This type of situation led to private company documents being publicly available to view online.

Further, clients of Visser, for example, SpaceX, Tesla and Lockheed Martin became involved once their agreement documents, NDAs, and other other documentation made it’s way online.

The malicious group responsible for leaking the information, DoppelPaymer, continued to release documents on the web as well as social platforms.

Breakdown of the Visser Attack

Now, here is the breakdown of the breach, all in one place.

What: Ransomware Attack and Data Breach

How Many Affected: Several Large Companies including Tesla, SpaceX and Lockheed Martin

Since the attack, Visser released a statement regarding the unfortunate situation.

“Visser Precision, LLC was the recent target of a criminal cybersecurity incident, including access to or theft of data. The company continues its comprehensive investigation of the attack, and business is operating normally. Visser Precision will continue full cooperation with its customer partner companies, but will make no further press comment at this time.”

The other companies involved all released similar statements regarding the incident. Most replies included responses ensuring that industry standard recovery and security protocol are currently in effect, and working to resolve the issue.

Who or what company will be the next to victim of a cyber attack? Come back next Friday for the next installment of Cyber Attack of the Week!