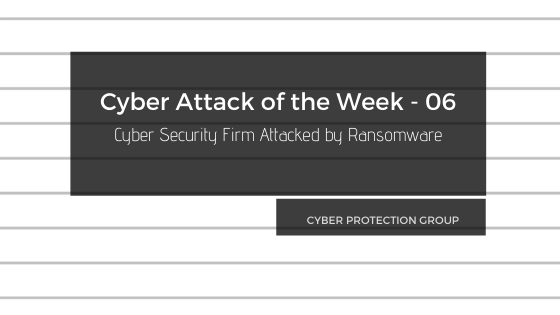 Welcome back everyone for another cyber attack of the week! For this article, I wanted to steer clear of everything COVID-19 related. Honestly, I need a change of pace from articles surrounding the virus. (And I think you might need a break as well.)

So, what better than an article about a ransomware attack on a cyber security firm?!

To begin, the cyber security insurance firm, Chubb, faced an attack from The Maze Team recently.

So, one can see that an attack on such a large organization is devastating to the functionality and operation of the business.

Now, you may wonder how the attack happened. Well, ransomware plagued the firm’s systems and data, thus encrypting the files and other databases. This means, no access to files, systems or operations.

Continuing, the team of Maze hackers who attacked Chubb once again threaten to release the information if the ransom is not paid.

Although, the Maze Team did not release any evidence of holding the information. The only evidence of the attack appears to be Chubb admitting their systems are encrypted.

Now, let’s take a look at the basics for the ransomware attack against Chubb Insurance.

Who: Chubb Insurance, one of the world’s largest insurance companies

Attacker: The Maze Team of Hackers

Currently, Chubb insurance released a statement saying that they are working closely with law enforcement to resolve the issue.

Further, current evidence points to a third party provider that works with Chubb, who may have also experienced a data breach. Thus, giving unauthorized users access to internal systems.

But, with all eyes on Chubb, security researchers are currently assessing the state of their cyber security. Evidence also shows that the company had an open RDP which could have also allowed attackers in.

Only time will tell what the next steps for the firm will be, and who actually is to blame for the security vulnerabilities. Will Chubb pay the ransom? I guess we will have to wait and see!